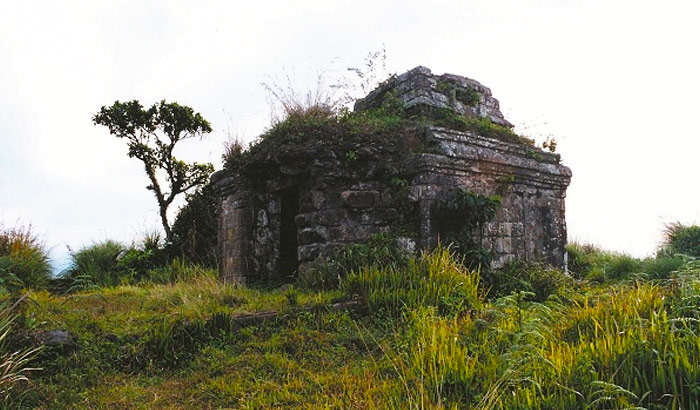 Mangaladevi Temple is situated in the Periyar Tiger Reserve and is amidst of the interstate boundary of Kerala and Tamilnadu. Its is on top of the Mangaladevi Hills and a wideview of the Periyar Sanctuary and Periyar Lake and Tamilnadu areas can be visible from this area. This temple is opoened to general public once in a year and that day is fullmoon day of chithirai month of tamil calendar. Normally it comes in the month of April- May. On this day devotees of Kannaki from Kerala and Tamilnadu flows from morning to evening to the temple for worship.

The ancient temple of Mangala Devi is hidden in the dense woods at the top of a peak 1337 m above sea level. The temple is built in the traditional Kerala style of architecture. Now we can see only the traces of that ancient sculptures.

The history of the temple related to the story of famous tamil epic ‘Silapathikaram’ by Elankoadikal. Kannaki and Kovalan were husband and wife and they led a happy life. Kannaki represents the Indian women who are true to their husbands. It is supposed that truthful wives curse can destroy anything that is found to be against their happy married life as per Indian epics. The same happened in the life of Kannaki and Kovalan.The king wrongly accused Kovalan as thief to his wife’s jewellery when Kovalan was tried to sell his wife Kannaki’s Chilanka ( an ornament wearing in the anklet ) as the small family was in need of money. The queen also lost her chilanka which was also having the same design to that of Kannaki. Kovalan was killed by the King and this made Kannaki furious and cursed whole Madurai city andthis made the burning of the Madurai city. It is belived that Kannaki was in meditation, after the burning of Madurai ,at Mangaladevi.

On chithira pournami day (May 4th 2015) the temple opened to general public and needs to cover a distance of 12 Kms from Kumily and can reachable either by walk or by Jeep. There is a 12-kilometer stretch to be covered through dense forests and high altitude grasslands to reach the temple. The surroundings of the temple are known for their pristine beauty. A wide variety of flora and fauna can be found in the area including the highly endangered Nilgiri Tahr (Hemitragus hylocrius). The Tahr is the state animal of the State of Tamil Nadu. The place is also known for the endemic orchid species, Habenaria periyarensis.