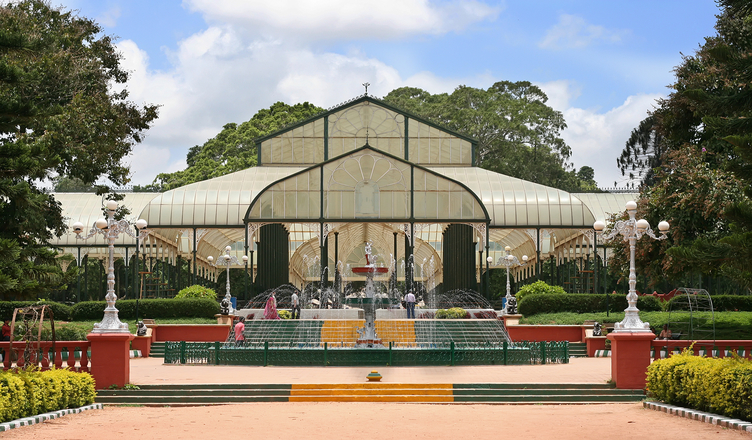 Lalbagh Botanical Garden is located in Bangalore and is nationally and internationally renowned centre for botanical artwork,scientific study of plants and also conservation of plants.A haven for all nature lovers,Lal Bagh covers an area 240 acres in the heart of the city and has nearly 1,854 species of plants.It was commissioned by Hyder Ali in 1760 and completed by his son Tipu Sultan.The garden features rare plants of French, Persian and Afghani origin and has attained the status of a Government Botanical Garden.The Lal Bagh Rock which is over 3000 million years old is found here and is a major tourist attraction.

Referred to as Rose or Cypress Garden up till 1856, this garden was commissioned by Haider Ali in 1760 who was a big admirer of Mughal Gardens and wanted to set up one in his own city as well. He was influenced by his father who used to work for Dilawar Khan, a viceroy of the Mughals and was especially passionate about setting up gardens. The garden is modelled on another one that existed in Sira which was situated 120 km away from Lalbagh.

Layout of the Garden

Spread over an area of 240 acres, Lalbagh is situated in south Bengaluru and is built around a tower built by the founder of Bengaluru,Kempe Gowda.The most meticulous part of this garden’s construction is perhaps its sophisticated watering system which irrigates over 1,000 species of flora including trees that are over 100 years old. The garden itself is a medley of lawns, flowerbeds, lotus pools and fountains. It also has a rock formation which is believed to be 3,000 million years old.

This garden has a lot of points of interest that will keep you engaged for the entire day.Some of these are the Floral Clock installed at the entrance of the park,Tree Fossil which is a carbonised remains of a 20 million year old coniferous tree,Glass House which is a magnificent edifice built out of glass,Deer Paddock, Aviary,Lecture Hall which was used for delivering horticulture lessons in the olden times,Lalbagh House,Lalbagh West Gate Guard Room,The Directorate Building,Lalbagh lake,The Museum which houses a wide variety of artefacts, Pigeon House which is an establishment made for attracting pigeons and other birds,Statue of Sri Chamaraja Wodeyar, Aquarium building which has some very interesting illustrations of underwater life,Flower Shows,LalbaghKempegowda Tower and Bandstand.