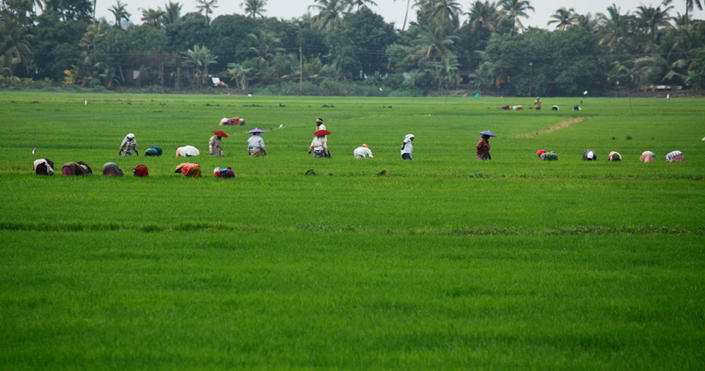 It is the major rice granary of Kerala, where vast stretches of verdant paddy fields are interlaced with enchanting backwaters create some of the unforgettable sights.Kuttanad, the rice bowl of Kerala is all about an agrarian community, striking a chord of harmony with its physical setting. Noted for its farming below sea level (about 4 to 10 feet) the land of Kuttanad possesses a socio-cultural fabric of its own. Four major rivers in Kerala viz. Pampa, Meenachil, Achankovil and Manimala flow into the region.

The Kuttanad area is also rich in avian population, and one can easily find flocks of parrots hovering in the paddy fields, especially those fields with rice stalks in bloom. You may also come across a black blanket sweeping across the sky, which on close look will reveal as yet another flock of birds. And this time its is the darter birds, which haunt the backwaters in and around Kuttanad and the adjoining Vembanad Lake.

As you explore the villages, don’t forget to take a walk by the numerous canals that crisscross Kuttanad, which are lined by tall coconut trees swaying in the breeze. During most part of the day, these canal stretches would be abuzz with different activities. There will be vendors on boat selling vegetables, grocery and fish to households on the banks of these canals. You would also come across big country boats called Kettu Vallams on which goods like coconut husk, rice grains etc. are transported to nearby markets in bulk.

For those interested in trying out few local dishes may do so by dropping at the small traditionally built wayside eateries, which are quite famous for backwater fish delicacies and tapioca. A popular naturally extracted beverage is the toddy, which is available in plenty and enjoyed by many for its speciality.