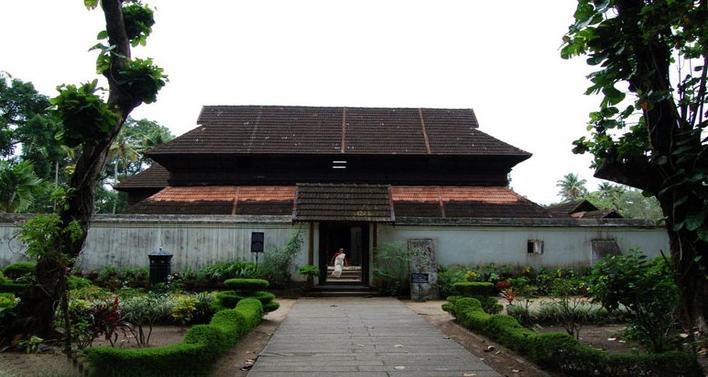 The Krishnapuram Palace is a rare specimen of the Kerala style of architecture, complete with gabled roofs, narrow corridors and dormer windows. Residence of the rulers of Kayamkulam Kingdom, the age of the palace is unknown.

Renovated some time in the 18th century, the palace is today a protected monument under the Archaeology Department. Recently it has been again renovated according to the scientific techniques prescribed for the protection of heritage buildings.

Today the palace is an archaeological museum, and the most fascinating exhibit here is the 49 sq.m – Gajendra Moksham – the largest single band of mural painting so far discovered in Kerala. Literally, the salvation (Moksha) of the elephant king (Gajendra), the theme of the mural is mythological and depicts an elephant saluting Lord Vishnu in devotion while the other gods, goddesses and saints look on. It is said that Lord Vishnu was the family deity of the Kayamkulam rajas. This mural was placed at the entrance to the palace from the pond to enable the rajas to worship the deity after their bath.

Other attractions here are the beautifully landscaped garden in the palace compound where you have a variety of flora typical of Kerala, and a newly erected Buddha mandapam, where a recently recovered statue of the Buddha is housed. Other collections at the museum include rare antique bronze sculptures and paintings.

Visiting hours: 0930 to 1630 hrs. Closed on Mondays and national holidays.