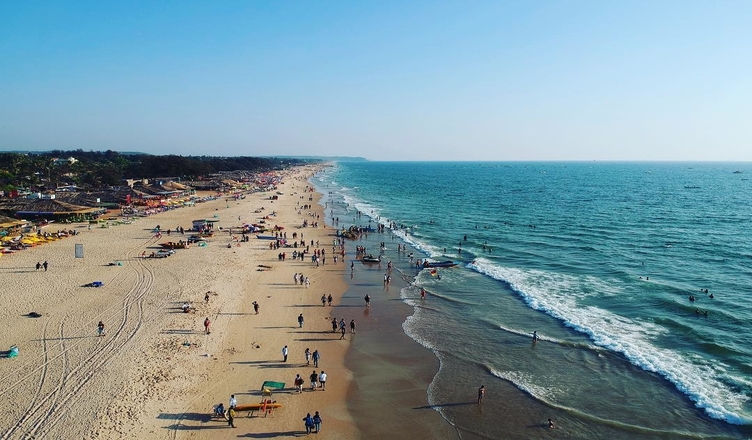 Goa is one such holiday destination which has something to offer to every traveller,regardless of budget and travel tastes,which is a reason why Goa is as much of a family retreat as it is a very popular honeymoon destination.The multitude of beaches in Goa ensures that you can take your pick depending on whether you want to experience the posh beach life from balconies of luxury resorts or get in touch with nature in makeshift huts.Some of the best beaches in Goa include Agonda beach,Baga Beach and Candolim Beach.Calangute Beach is the busiest beach in Goa,while Baga Beach is comparatively a lot less crowded.

Situated 15km from the capital city of Panaji,Calangute Beach is the largest beach in north Goa. Located between Candolim and Baga beach,it is a hub for tourists and backpackers from all over the world.The beautiful golden stretch of sand and scintillating water coupled with the gentle rhythms of pop music that plays here makes it the perfect destination for a laidback afternoon.This shore of the sea is a glittering beauty and is also known as the’Queen of Beaches’owing to its picturesque sceneries.

One of the most popular beaches of Goa,Baga Beach is located close to Calangute beach,around 30 Km North of Panaji.It is named after the’Baga creek’which flows into the Arabian Sea and is the perfect destination to witness beautiful sunsets and enjoy the cool morning breeze.Baga Beach is popular for its nightlife with some very famous clubs such as Britto’s,Tito’s and Mambos.The shacks come to life in the late evening with music blasting and amazing customer service.There is also a range of water sports that you can try your hands at.

Boggling,Banana Boats,Bumper Boats,Water Scooter,Jet Ski,Dolphin Cruises and Parasailing.Barracuda Diving close to the lagoon near Baga River which is the perfect way to acquaint yourself with the wonderful world that lies underwater.

The Basilica of Bom Jesus church is one of a kind in India and is known for its exemplary baroque architecture.Built in the year 1594 and consecrated in 1605,this church coincides with the beginning of Christianity in India.It holds the remains of St.Francis Xavier,a special friend of St.Ignatius Loyola with whom he founded the Society of Jesus (Jesuits).Even after 400 years,the remains are in a good condition and are taken out once every decade.Up until half a century ago,Goa was the capital of Portuguese rule in India and this is part of their heritage.A site with rich cultural and religious significance,the Basilica of Bom Jesus has been declared a World Heritage Site by UNESCO.The basilica of Bom Jesus is the only church in Old Goa that is not plastered on the outside.The Basilica of Bom Jesus is over 408 years old and is open to the public every day.