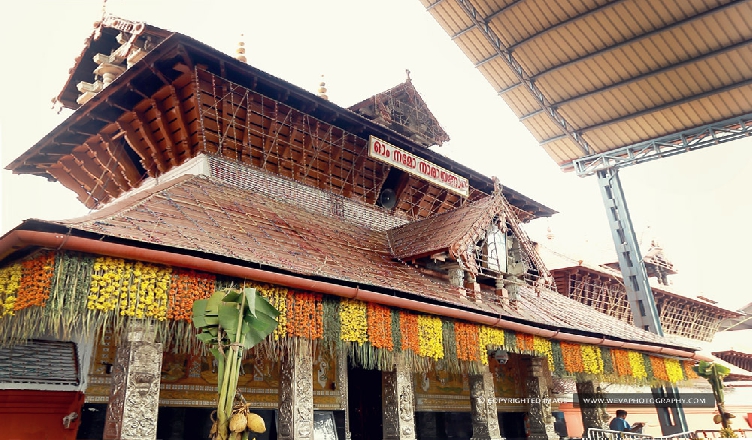 Guruvayur Sri Krishna Temple is a Hindu temple dedicated to the god Krishna,located in the town of Guruvayur in Kerala, India. It is one of the most important places of worship for Hindus of Kerala.The temple (puja) routines are strictly followed. The tantri is available full-time at the Temple to ensure this. The Melsanti (Chief Priest) enters the sanctum sanctorum in the morning and does not drink anything up to the completion of “noon worships” at 12:30 PM.Non-Hindus are not allowed in the temple.The temple has a dress code and everyone should follow these dress code:

The festivals that are conducted in the temple is “Ulsavam” This is conducted in the month of Kumbha (Feb-March) and lasts for 10 days. The hoisting of the temple flag atop the flagstaff (Dwajastambham) about 70 feet high heralds the festival.”Vishu” The Malayali New Year day, Vishu, falls on the 1st of Medam month (mid-April). As the belief goes, one’s fortunes for the year depends on the auspiciousness of the objects that one sees first at dawn on this day.”Ashtami Rohini” In the month of Chingam (July-Aug), under the Rohini Nakshatra, on the 8th day of the waning moon of Sravana is the day of Lord Krishna’s birth i.e. Janmashtami. A very special day in all Sree Krishna temples.”Kuchela’s Day” This is observed on the first Wednesday of Dhanu (December-January). Kuchela was a poverty-stricken Brahmin and a childhood friend of Lord Krishna.

Sree Kurumba Bhagavati Temple (alternatively Kodungallur Devi Temple) is a Hindu temple at Kodungallur, Thrissur district, Kerala state, India. This is one of the most ancient temples in India. The idol of supreme mother Sree Bhadrakali or Sree Kurumba (popularly known as “Kodungallur Amma”) in the temple is unique and fierce, as it has eight hands with various attributes. One is holding the head of demon king Daruka, another a sword, next an anklet, another a bell, and so on. Bhadrakali (a form of mother Mahakali) is believed to be born from the third eye of lord Shiva.The temple is in the centre of Kerala and is referred as Malayala Bhagavathi by Tamil speaking communities.The temple is situated in the middle of a plot of land about ten acres, surrounded by banyan and peepal trees. The srikovil is facing north.

The festivals are “Bharani Festival” The Bharani festival at the Kodungallur Bhagawati temple is one of the grandest in Kerala. It is a month of festivities from the Bharani asterism in the month of Kumbham to 7 days after the Bharani asterism in the month of Meenam. It normally falls between the months of March and April. The festival usually starts with the ritual called ‘Kozhikkallu moodal’ which involves the sacrifice of cocks and shedding of their blood, which forms an important feature of this temple.”Thalappoli Festival” The Thalappoli festival is in the month of Makaram (January–February). The four-day Thalappoli commences from the evening of Makara Sankranthi with religious rituals. Big procession headed by richly caparisoned elephants are taken out to the accompaniment of Pancha Vadyam, Paancari, Paandi, etc. It is celebrated by all sections of people of Kodungalloor and adjacent areas. The first day of Thalappoli comprises of many offerings to goddess. “souseeni” as it is called among the kudumbi community is one among them. This is basically mixing riceflakes with jaggery and coconut, later on this is shared among the devotees around.

Vadakkunnathan Temple is an ancient Hindu temple dedicated to Shiva at city of Thrissur, of Kerala state in India.In the year 2012 Archaeological Survey of India (ASI) has recommended 14 sites, including Vadakkumnathan Temple and palaces, from Kerala to include in the list of UNESCO World Heritage Sites.Non-Hindus are not allowed to enter into the temple.

The festivals are“Maha Shivarathri” Maha Shivaratri is the main festival which is celebrated in the temple.Cultural and musical programmes are held in the temple premises. Around one lakh temple lamps (hundred thousand)are lighted in the festival. The idol of Vadakkumnatha is not taken out for procession.”Aanayoottu” The Aanayoottu of feeding of elephants, is the second biggest festival held in the temple. The devotees refer to elephants as Lord Ganesh’s incarnation. The festival falls on the first day of the month of Karkkidakam (timed against the Malayalam calendar), which coincides with the month of July. It has been the regular annual practice at the temple for the last 20 years to conduct a large-scale As Ganapathy Havana and Aanayoottu Dravya Maha on the first day of the Karkidakom month of the Malayalam calendar.”Thrissur Pooram” One of the most colourful temple festivals of Kerala, Thrissur Pooram is conducted in the temple premises but the temple is not a participant in this festival. There is no special pooja or special offering during the pooram day. The main attraction of the Pooram is the Elanjitharamelam, a two-hour Chendavadyam (with five instruments) is held near Koothambalam in the temple, by the top most artists from the state.

The Cheraman Juma Masjid is a mosque in Methala, Kodungallur Taluk, Thrissur District in the Indian state of Kerala.It is the first mosque in India and the second in the world where Juma prayers were started. It was built by Malik Deenar.Individuals of all religions bring oil for the lamp as there offering.Unlike the other mosque cherman mosque allows the entry of people from other religion to visit the place.