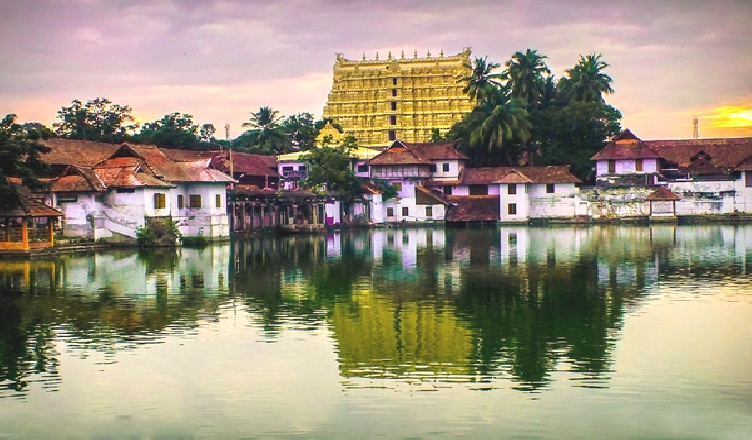 Located inside the East Fort in Thiruvananthapuram, the capital city of the State of Kerala in India is the Sree Padmanabha Swamy temple dedicated to Lord Vishnu and the idol is in the Ananthashayanam posture.This idol which is made up of 10,008 saligramam which is 18 feet long.The saligramam is plastered with kudusharkara yogam which is a mixture of Ayurvedic herbs.The idol is very large that it is seen from 3 different doors.A unique feature of these temple is that the idol is present here in all sittings,satnding and reclining postures.The reclining postures can be seen through the 3 doors.There are many festivals related to this temple. The major festivals are bi-annual. The Alpashy festival which is in October/November and the Panguni festival which is in Tamil month Panguni, March/April, lasts for 10 days each.A major annual festival related to Padmanabha temple is the Navaratri festival.The temple and its assets belong to Lord Padmanabhaswamy, and were for a long time controlled by a trust, headed by the Travancore Royal family. However, for the present, the Supreme Court of India has divested the Travancore Royal Family from leading the management of the temple.

The Attukal Bhagavathy Temple is a Hindu religious shrine at Attukal, Trivandrum in Kerala, India. Godess Bhadrakali (Kannaki), mounted over ‘vethala’, is the main deity in this temple. Bhadrakali (Mahakali).The main festival in attukal is Attukal Pongala festival, in which over three million women participate.A festival that has figured in the Guinness Book of World Records for being the single largest gathering of women for a religious activity, the Attukal Pongala continues to draw millions of women with each passing year.

Attukal Pongala Mahotsavam is a 10 days festival which falls on February – March every year (Malayalam month of Kumbham). The festival begins on the Karthika star with the traditional Kappukettu and Kudiyiruthu ceremony, the idol of Devi, is embellished with Kappu (Bangles). The 9th day of the festival, ‘Pooram day’ is the major attraction, The Attukal Pongala day and the festival will conclude with the Kuruthitharpanam at 10th day night.Millions of women gather every year in the month of Kumbham around this temple and prepare Pongala (rice cooked with jaggery, ghee, coconut as well as other ingredients) in the open in small pots to please the Goddess Kannaki. Pongala (literally means to boil over) is a ritualistic offering of a sweet dish, consisting of rice porridge, sweet brown molasses, coconut gratings, nuts and raisins. It is done as an offering to the presiding deity of the temple – the Goddess – popularly known as Attukal Amma. Godess Attukal devi is believed to fulfill their wishes and provide prosperity.

St. Joseph’s Cathedral
St. Joseph’s Metropolitan Cathedral, also known as Palayam Palli is the Roman Catholic Latin Rite cathedral of the Archdiocese of Trivandrum. The cathedral has a statue of its patron St. Joseph with the child Jesus in the middle of the facade and a statue of Jesus with hands raised atop the tower. The church which is white in colour was painted red from 1927 to 2010. It was renovated during the period 2008 to 2010.

Beemapally, a suburb of Thiruvananthapuram, is right under the flight path of planes landing at the Thiruvananthapuram airport. Beemapally is famous for the mosque known as Beemapally Dargah Shareef.Every year there is a festival held to venerate Beema Beevi which attracts thousands of pilgrims from all faiths and castes.(Chandanakudam Mahotsavam Or Beemapalli Uroos) Beemapally Mosque is famous for its annual Urs which attracts scores of pilgrims from all walks of life. The festival, which marks the death anniversary of Beema Bheevi, starts on the first of Jama dul Akbar and continues for the next ten days and is a colorful and vibrant event. The celebration begins with the hoisting of the customary flag of the mosque in front of the elders and other devotees. The devotees carry money in pots which are adorned with flowers and incense sticks. The pot’s opening is swathed in white cloth and a garland is fastened around the neck. The pots are daubed with sandal paste which is why the festival is called Chandanakudam (sandal pot).Beemapalli Mosque is a hub of activity during the festivities and many art forms like daharamuttu are performed in the mosque. Many religious discussions are held and Islamic devotional songs are performed outside the mosque. On the final day of Chandanakudam Mahotsavam, a flag from Beema Beevi’s grave is taken; there is a grand procession with caparisoned elephants and the music of the panchavadyam (five instruments).