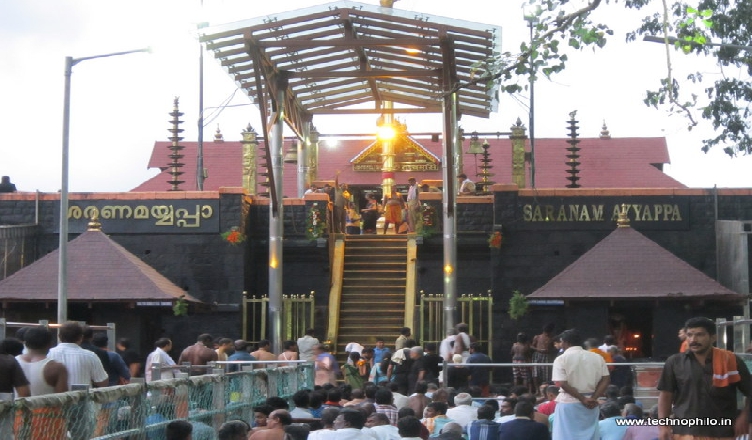 Sabarimala is a Hindu pilgrimage centre located at the Periyar Tiger Reserve in the Western Ghat mountain ranges of Pathanamthitta District.The temple is dedicated to Lord Ayyappa. It is one of the largest annual pilgrimages in the world.The devotees are expected to follow a Vratham (41-day austerity period) prior to the pilgrimage.This begins with wearing of a special Mala (a chain made of Rudraksha or Tulasi beads is commonly used, though still other types of chains are available.). During the 41 days of Vratham, the devotee who has taken the vow, is required to strictly follow the rules some of them are vegeterian,allow the hair and nails to grow without cutting.

Women in large numbers did not visit the temple, due to the hardship in reaching the temple.Women pilgrims above the age of 50 would visit the temple to conduct the first rice-feeding ceremony of their children (Chottoonu) in the temple premises.The prasadam at Sabarimala temple is Aravana payasam and Appam. These are prepared by using rice, ghee, sugar, jaggery etc.Harivarasanam is recited before closing the temple door every night. The Harivarasanam prayer, which is sung at Sabarimala is a Urakkupattu.The temple of Malikappurath Amma, whose importance is almost in par with Lord Ayyappa,is located few yards from Sannidhanam.

The main festival in sabarimala is Makaravilakku, is an annual festival held on 14 January (Makar Sankranti) in Kerala, India at the shrine of Sabarimala. The festival includes the Thiruvabharanam (sacred ornaments of Ayyappan) procession and a congregation at the hill shrine of Sabarimala. An estimated half a million devotees flow to Sabarimala every year to have a darshan (vision) of this ritual.

The Aranmula Parthasarathy Temple is one of the “Divya Desams” and it is  located near Aranmula, a village in Pathanamthitta District, Kerala.It is said that the idol was brought here in a raft made with aru (six) pieces of mula (bamboo) which gave the town its name,

Aranmula Mirror is also related to the history of this temple.The king of Travancore wanted to donate a crown made of rare metal to the temple and he found a rare combination of Copper and lead.It is believed as per the tradition that preparing the metal polished mirror was produced only by a family.

Aranmula Boat Race is celebrated annually on the Pamba river to commemorate the poor Hindu.The race is held on the last day of the Onam festival when snake boats around 100 ft (30 m) with four helmsmen, 100 rowers and 25 singers participate.

The Aranmula Vallasadhya is a ritual offering to the deity Lord Parthasarathy in which the oarsmen of the snake boats are offered a feast. With over 70 dishes it is probably one of the largest vegetarian feasts in India. An event that combines ritual offerings, sports and music, the elaborate feast lasts for more than two hours. The oarsmen perform special songs for the feast beginning by praising Lord Parthasarathy of Aranmula. Their songs then become more playful and include demands of particular dishes that they wish to be served.

The Parumala St. Peters and St. Paul’s Orthodox church, situated in Mannar on the banks of river Pampa, is about 13 kms away from Thiruvalla.St. Peter’s and St. Paul’s Church, Parumala (Parumala Pally) is a prominent parish church of the Malankara Orthodox Syrian Church.The ormaperunnal (commemoration day) of the Parumala Thirumeni is celebrated on 1st and 2nd of November with a grand ceremonial procession. Special rituals and prayers are held on these days which is attended by thousands of devotees

The Maramon Convention, one of the largest Christian convention in Asia, is held at Maramon, Pathanamthitta, Kerala, India annually during the month of February on the vast sand-bed of the Pampa River next to the Kozhencherry Bridge. It is organised by Mar Thoma Evangelistic Association, the missionary wing of the Mar Thoma Church.Maramon Convention is held for eight days during the first week of the Great Lent that usually falls in February. The tent has a seating capacity in excess of 160,000 people. They are seated on the dry sand bed.The programmes in maramon convention is  pre-eminently an assembly of Christians who once a year come here for listening to the Word of God as read and expounded by Christian leaders from all over India as well as abroad. Introduction and promotion of Church activities and Preaching occupy the major part of the convention programme. In the morning there will be separate Bible study classes for Men, women, youth and children conducted by specially invited leaders. The mornings and afternoons are public meetings and in the evening, meetings are for men only.The convention is a clear example of the unity between the people from various sections of the churches in Kerala.

Vavar (pronounced Vaa-var= “vav-vindavar”)meaning vavu = “moon” vindavar= “who splits”, also known as Vavaraswami. There is a shrine dedicated to Vavaraswami at Sabarimala, as well as Varaswamis mosque at Erumely next to an Ayyappa temple. The devotion of Vavaraswami to Ayyappan and the key role that the Islamic Masjid has in the Ayyappa Pilgrimage, highlights the communal harmony in Kerala.As per Islamic teachings there is no idol, but just a carved stone slab symbolises the deity of Vavar. A green coloured silk cloth is hung across one of the three walls. The fourth side is open. An old sword is also kept near the wall. The main offering to Vavar is black pepper. A Muslim priest still performs the rituals today as he was a Muslim.