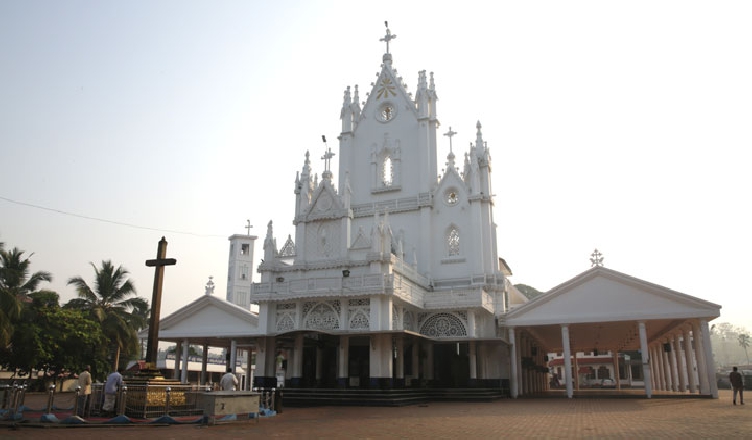 Bharananganam, an important pilgrim centre in South India, is located on the banks of Meenachil river, 5 km east of Pala in Kottayam district in the state of Kerala.. There is a chapel nearby which contains the mortal remains and the tomb of Sister Alphonsa who died on 28 July 1946. Feast of Our Lady of Mount Carmel on 9th of November and Feast of St Sebastian on 20th of January are the important festivals celebrated here.When you visit St. Alphonsa’s Church in Bharanangam, you can visit the room where St. Alphonsa lived and died. The room is preserved in the Bharanangam Convent. This simple room with traditional roofing and floors plastered with cow dung has a statue of St. Alphonsa in the center.The main festivals at St. Alphonsa’s Church in Bharananganam are St. Sebastians feast (January 20, 21), St. Alphonsa day (July 28) and St.Francis Assisi feast (December 8th).

Manarcad Marth Maryam Cathedral (St. Mary’s Cathedral), is a Syrian Orthodox church located about 9 km from the town of Kottayam in Kerala, India and a destination for people on annual pilgrimages seeking the blessings of the Virgin Mary.The feasts are

May 6 – Commemoration of St. George

September 8 – 8 Day Lent, Feast of the Virgin Mary’s birth; millions attend the annual 8-day celebration, known as Ettunombu Perunnal, during which an image of Christ and the Virgin is unveiled.

This church is situated beside the Puthuppally-Changancherry road about a kilometre from the Puthuppally junction, on the eastern bank of the Kodoor river. It is a prominent church that belongs to the Malankara Orthodox Syrian Church.  The surrounding areas of church are panoramic and very beautiful. The old church was well preserved church with wall murals dating back to ancient times. These unique wall murals have been painted using vegetable dyes.The feast of St.George are Kodiyet (flag hoisting),Virakedeel, Vechoot and Nercha Vilampu,Rasa (Ceremonial Procession),Deepa Kazhacha (Light Display) Karimarunnu Prayogam (Fire works).

St Mary’s Forane Church also known as Martha Mariam church is located in Meenachil Taluk, 22 kms north of Kottayam.The church enshrines a miraculous statue of Blessed Virgin Mary. Locally known as ‘Kuravilangad Muthiyamma’, this statue is carved from granite and it is said to be brought from North India. A single block granite cross measuring a height of 48 feet is located in front of the church. The devotes offer coconut oil in the lamps at the foot of the cross.Kuravilangad Moonnu Nompu, a three day feast at the church, is attended by thousands of people from all over Kerala . The main attraction of the feast is the ceremonial procession held on the second day. It is on this day that the replica of the vessel used by prophet Jonah of the OT is taken out.

Vaikom Temple
Vaikom Mahadeva Temple is one of the oldest and ancient temple in Kerala. It is located at Vaikom in Kottayam district of Kerala.There are many festival celebrated in temple but Vaikom Ashtami is one of most popular and main festival celebrated in Vaikom Mahadeva Temple .It is conducted at the month of February-March and November to December every year respectively.The exact date can be founded by the Malayalam calender. Arattu is another festival which is also celebrated in temple.The main pooja performed daily are Palli Unarthal,Nadathurappu,Nirmalya Darshanam,Panthiradi.

Erumely, also spelt “Erumeli” is a village and town in the southeast part of Kottayam district in Kerala state, India. It is situated on the way to Sabarimala and also an important halting place (idathavalam) for the Sabarimala piligrims.It is revered by both Hindus and Muslims.There is a mosque- Vavar Palli, located close to the temple. The ceremony of Petta Thullal during the annual pilgrimage is a unique feature of this place. Petta Thullal starts from the kochambalam and the dancers proceed to the Mosque, in the name of Vavar, who was a close friend of Ayyappan, to pay their homage. They are ceremonially received there and goes around the mosque. A representative of Vavar Swamy will then accompany the group to the big temple (Valiambalam) which is about a kilometre away. Petta Thullal comes to an end after going around the the big temple. The devotees wash their bodies in the small river nearby and go to Sabarimala.Petta Thullal takes place almost everyday from the 1st of the malayalam month of Vrichikam (around November) till a couple of days prior to the Sabarimala temple closing on January.

Kumaranalloor is a big town in Kottayam municipality, Kottayam taluk, Kerala, India. Kottayam city is just 5 km south of Kumaranalloor.Kumaranalloor is an ancient cultural center. The Town is famous for Kumaranalloor Devi(Goddess) Temple and the annual Trikarthika festival of the temple. This place was known as ‘Thingalkkadu’.Kumaranalloor Devi temple is considered as one of the most important Devi temples among the 108 Durgalayas (Devi temples) in Kerala.The important festival of the temple is Thrikkarthika celebrated in the month of Vrischikam (November–December). On the Karthika day it is usual to make a nivedyam (offering) in the precincts of the Udayanapuram and Thrissur Vadakkunnatha temples.The temple also manages some Educational Institutions

The temple is situated in the panachikadu village 11 kilometers away from the well known Kottayam District Head Quarters of South Kerala. This village resembles the famous Kodajadri.The temple is known as Dakshina (Southern) Mookambika.Many Saraswathi temples perform pooja only during the ‘ Navarathri period’, this temple offers pooja throughout giving ‘ darshan’ to the devotees.A temple worth visiting especially for children  to  seek mother’s blessings which would instill lot of confidence. Vidyarambham-  the ceremony that initiates infants to the world of letters is a major event,  as part of the Navaratri festival at the Panachikkadu temple. This ceremony is held on the Vijayadashami day, which is the last day of the Navaratri festival. Annual festival held during navarathri and last three days.

The temple is situated in Ettumanoor, a small town near Vaikom in kottaym district.One of the elegant sights associated with the temple is Ezhara Ponnana Ezhunnallathu and it is the ten day long anual festival celebrated in the month february to march.Ezhara’ means seven-and-half and ‘Ponnana’ means golden elephant. Each of the seven elephants is two feet high and the eighth one is of one foot only. Hence they are together called seven-and-half elephants.The Thulabharam is one of the important rituals of this temple. People make offerings to God for favours received. On balance, the child or man for whom offerings were promised to God, is weighed against offerings ranging from gold to fruits.Ettumanoor Mahadeva Temple hosts the arattu festival celebrated on a grand scale on the Thiruvathira day in February–March every year.

Pazhaya Pally Juma Masjid
Located 21 km from Kottayam district of Kerala.The annual festival of this mosque Thangal adiyanthiram, is well known and marked by a grand community feast. On this day devotees are offered with meat and rice. The Chandanakuddam festival at the mosque is one of the largest crowd pulling events in Changanacherry town.

Thazhathangady Juma Masjid is a mosque situated in Thazhathangady, one of the Heritage Zones of Kerala, India, near the town of Kottayam. It is one of the oldest mosques in India and is more than 1000 years old. It is famous for its richness of architecture, wood carvings and the beauty.