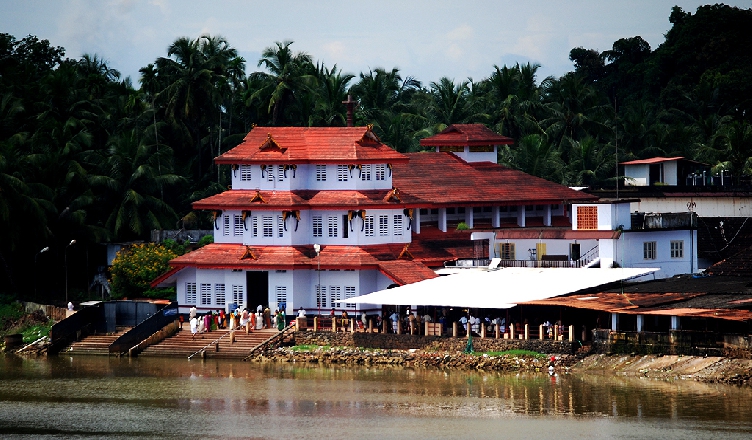 The Mamanikkunnu Mahadevi Temple is dedicated to Shakti and is located in Irikkur, Taliparamba, Kannur, Kerala, India. This Temple is situated on the eastern bank of Irikkur River. This part of the country was formerly occupied by Namboodiri Brahmins.The surrounding land was all dense forest. During tippu’s invasion the entire ‘gramam’ was destroyed by the invading army.There were two temples: one Vishnu temple at Kannamgode and another Devi temple at Mamanikkunnu.Devotees visit this temple to seek fulfillment of the following:-

Thiruvangadu Sree Rama Temple is one of the four Sree Rama temples in Kerala which is two kilometers away from Railway station,Thalassery.This temple is unique due to its historical and legendary importance.The all benevolent diety Sree Ramaswamy is known as Thiruvangad Perumal who is the supreme force of southern ‘Thattakam’ among the five dieties of Kolath nadu which is also known as ‘ Iemperumalidam’.The most important festival is the Vishu Mahotsavam which commences on Vishu with the hoisting of the ceremonial flag on Dhwaja Stambha. It lasts for seven days with the daily elephant processions, special poojas and various programs culminating on arattu or bathing the deity, on the last day in the temple tank.Kathakali, Chakyar Koothu, are performed on all days in addition to the temple rituals.

Muthappan Temple, also called Parassinikadavu Muthappan temple is a Hindu temple, located at Anthoor Municipality on the banks of the Valapattanam river about 10 km from Taliparamba and 16 km from Kannur City in Kannur District, Kerala.The temple is also a popular destination for travellers and pilgrims to savour the charm of Theyyam, a ritual that is performed here on a daily basis. Men adorning masks and costumes with a riot of colours perform this temple art form and it represents conflict between good and evil, with good ultimately emerging victorious.

The Diocese of Kannur has a history that goes to the 15th century. It was with the advent of the Portuguese sailor, Vasco de Gama who landed at Calicut on 20th May 1498, that the missionaries had access to this area.The four Franciscan missionaries with Hovavo Nova, their group leader were allowed to build a chapel in Kannur.The new diocese comprises the territory of the civil district of Kannur to the north of Mahe river, excluding Pallur, Chelakara, Panthakal and Chenkallai which belong to the municipality of Mahe and the territory of the civil district of Kasaragod which falls to the south of Chandragiri river. The erection of this new diocese was a historical event for Kannur which has 500 years of Christian tradition. The establishment of the new diocese on the auspicious occasion of the Platinum Jubilee of the Diocese of Calicut was welcomed with cheer, by the people who consider the diocese of Kannur as a gift of God to this region.

The Odathil Palli Mosque is a 500-year-old mosque located near the old bus stand in Thalassery, Kannur district of Kerala. Situated at the heart of Thalassery, this mosque was built by an Arab merchant in a typical Kerala Hindu temple style. The mosque which has neither domes nor minarets is not open to non-Muslims.