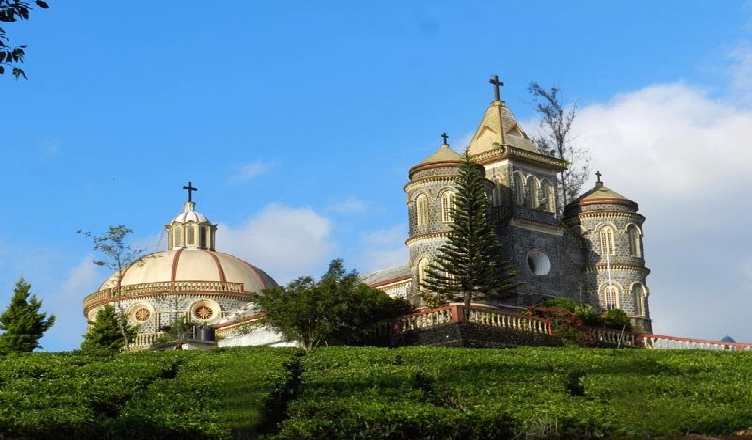 The Pattumala Matha Church is a Roman Catholic Latin Rite pilgrim shrine in Kerala dedicated to Our Lady of Good Health.It is served by the Congregation of the Missionary Brothers of Saint Francis of Assisi (CMSF). The renowned architect J P Bright, Thiruvananthapuram, is the designer of this church. The church is built entirely of granite and situated in the midst of tea plantations. The name Pattumala means “hill draped in silk.” It is located 8 kilometres (5.0 mi) from Peermade and 24 kilometres (15 mi) from Thekkady.

The church is situated in Rajakumari south,Idukki District,Kerala. it is primarily known to the world by the presence of the Deivamatha catholic Syrian church, a pilgrim centre of Holy Mary.. This area was under the rule of Arwar, a king in Chera dynasty. It is believed that Chera culture was prevailing here. Inhabitants were a mixture of Tamilians, Telungu and Kannadas.

Kurisumala Ashram is a Cistercian Monastery in Syro-Malankara Catholic Church in the Sahya Mountains in Kerala, India.It is an interesting view point and a wonderful ecotourism spot.It offers you a calm and quiet atmosphere which can energies the body and mind.From the top of the mount,one can experience the panaromic view of high range hills and valleys.

The ancient temple, 15Kms from Thekkady, is hidden in the dense woods at the top of a peak 1337 m above sea level. The temple is built in the traditional Kerala style of architecture and visitors are allowed here only on Chitra Pournami festival day. The peak commands a panoramic view of the eastern slopes of the Ghats and small hill villages of Tamil Nadu.

The Temple is dedicated to Lord Ayappa. It is situated at Anachal, 15 KM from Munnar. The six day annual festival commences with the ceremonial hoisting of the temple flag (Kodiyettam). On the last two days processions with traditionally decorated elephants lend colour and majesty. Art forms like ‘Ottanthullal’ enliven the temple premises. The traditional ‘Thookkam’, a ritual is also conducted.

The temple, dedicated to Lord Krishna , is located at the heart of Thodupuzha town . It celebrates a ten day festival every year . On the first day , a concert by renowned musician is presented . ‘Chakyarkoothu’ is held on the 4th , 5th and 6th days of the festival. ‘Kathakali’ performances are also held on 5th and 6th days . The most auspicious days of the festival are the 7th , 8th and 9th. Procession. participated by five caparisoned elephants and temple percussion music are held in the mornings and evenings on these days.

Valliyamkavu Devi Temple is a historic Durga shrine located , 15 km (9.3 mi) east to 35th mile near  Munda kkayam. The temple is surrounded by hills and forests and situated near to Travancore Rubber and Tea Company. The history of the temple is as old as Dvapara Yuga. Pandavas  along with their wife Draupadi, during the time of exile reached the present Panchalimedu and stayed here for a long time. Eight poojas are held here everyday including palliyunarthal, nadathurakkal, usha pooja and ucha pooja in the morning section. Evening section includes Nadathurakkal, Deeparadhana, Attazhapooja, Nadaadakkal and Guruthi. The Thiruutsavam and Pongala is hosted in the month of May (Meenam), in the presence of many pilgrims. Durgashtami is also an important event. Special weekly days are Tuesday and Friday. Narangavilakku and aiswariya poojas are held on Fridays.