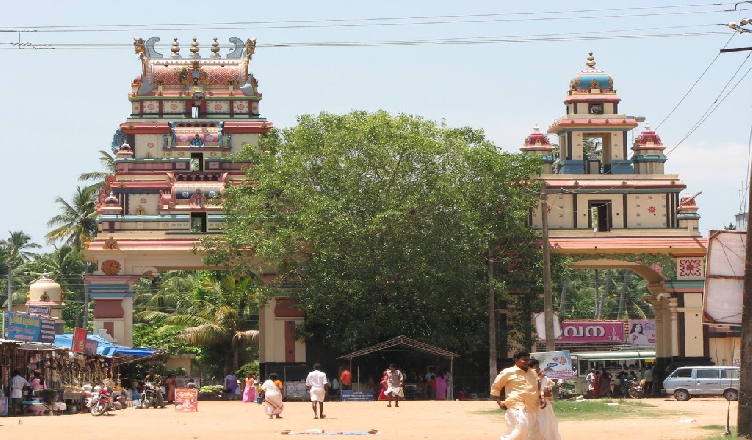 Oachira Temple is an extremely ancient temple located in Oachira in Kollam district in the state of Kerala. The Oachira Temple is unique in the sense that it does not have covered structures for temples. People worship the Para Brahma under neatly preserved trees.

According to the Puranas, this temple is one of the famous sacred places of Kerala and India.Oachira is on the border of Kollam and Allappuzha districts, next to the National Highway 47.Every year the Oachira Vrischikam Festival is celebrated during December and January. Oachirakkali and Oachira kalakettu is the main festival.Oachirakkali is a famous ritual performed here during June and it involves mock-fighting in muddy water by traditional martial art experts. Ochira Kalakettu is a ritual related to irupathi ettaam Onam (28th Onam day) at Ochira Parabrahma temple. Gigantic effigies of bulls in pairs called kettu kaalakal are made and displayed in the temple premises. Each bull effigy is a contribution of 52 divisions of Onattukara region. Each kara (land subdivision) decorates their bull to the temple premise. The best bull effigy is also given a prize.

This Ganapati temple is located in Kottarakkarawhich is 25 km from Kollam.The deities of Kottarakkara Sree Mahaganapathy Kshethram are Lord Shiva, Goddess Parvati, Lord Ganesha, Lord Murugan, Lord Ayyappan, and Nagaraja. Even though the main deity is Lord Shiva, the main priority is given to Lord Ganesha. The main offerings of the temple are Unniyappam Udayasthamanapooja, Mahaganapathi homam and Pushpanjali.

Achankovil Sastha Temple is a Hindu temple and one of the 108 Sasthalayas, located in Pathanapuram of Kollam district in the Indian state of Kerala. It is also one among the famed Pancha Sastha temples in Kerala, the other four being Kulathupuzha, Aryankavu, Sabarimala and Kanthamala temThe temple located in the deep forest interiors is mostly visited by Tamil devotees than that of Malayalee devotees. As in Sabarimala temple, Achankovil temple also have eighteen steps.

Kulathupuzha Sastha Temple is a Hindu temple located on the banks of Kulathupuzha river, a tributary of Kallada River. It is located in Kulathupuzha in Pathanapuram of Kollam district in the Indian state of Kerala. The presiding deity there is Lord Ayyappa in the form of Balasastha.The subordinate deities in the temple(ugramoorthi) as well as in auspicious mood (mangalapradayakan), Shiva, Yakshi, Vishnu, Ganapathi, Boothathan, Nagar, and Karuppaswami.

The Holy Cross Church is situated in Tangassery, a beach town on the shores of the Arabian sea in the city of Kollam, Kerala State, India. Geographically this place provides a natural harbor for the Quilon coast. Significantly historic relevant records indicate that the port of Quilon was also known as the “Bay of Tangasseri”. This was built in the year 1841 near the great and famous entrance of Tangasseri.