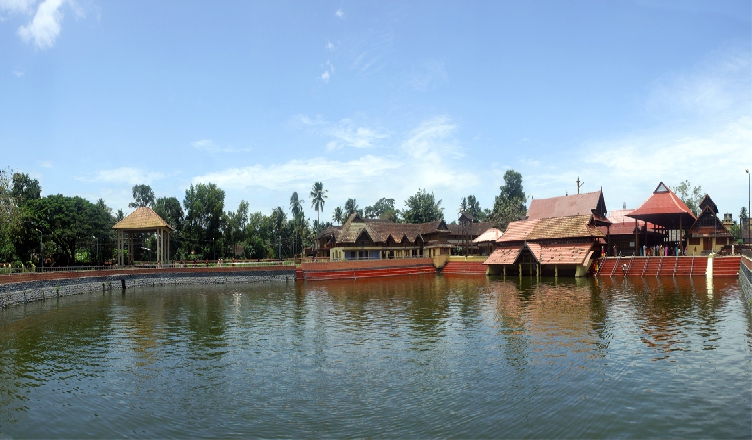 Ambalapuzha, situated 14 km south of Alappuzha on the Kollam-Alappuzha Highway is a well-known Hindu pilgrim center. The ‘Sri Krishna temple’ here is one of the main Lord Krishna temples in Kerala.The main festivals celebrated in this temple are the Arattu Utsavam held in March-April and the Champakkulam Moolam Water Festival held in June-July. The temple built in the traditional architectural style display paintings of the Dasavatharam (the ten incarnations of Lord Vishnu) on the inner walls of the Chuttambalam.

Significance: Known for the famous ‘Palpayasam’ used to be made here and distributed as an offering.

Best Time To Visit: Throughout the year

Mannarassala is situated at35 Km awa y from Alappuzha near Harippad in NH 47 on the Alappuzha-Kollam route.Mannarassala Sree Nagaraja Temple is the largest with 30,000 images of snake gods, and hundreds of snakes living around the temple.The most important offering in the temple is noorum palaum which is available at the temple is credited with curative powers. This is the mixture of rice powder, turmeric powder and milk.The major festival here is the Ayilyam festival which falls on the Ayilyam asterism in the Malayalam month of Thulam( October / November). Ezhunellathu (procession) in which all the serpent idols in the temple and the sacred grove are taken to the illam (the Brahmin ancestral home) that manages the temple. The priestess will carry the golden deity (Thidambu), which is the presiding deity of the temple to the Illam.

Significance: One of the most important and ancient centers of snake worship in Kerala.

Harippad is a small town, which is about 15-20 km from Alleppy in Kerala.  A great temple dedicated to Lord Subrahmanya is situated here. It is believed that when Lord Subrahmanya victoriously vanquished Tharakasura and Soora Padma and was returning back he was received in this place with Music by Lord Vishnu.The temple is popularly called as Dakshina Palani.

Significance: The presiding deity of the temple is Murugan in four armed form with Vel in one hand, Vajrayudha in another hand one hand bestowing blessing and the other toughing its thighs. The idol is about eight feet in height.

St. Mary’s Forane Church is one of the best places to visit in Alleppey. This beautiful church traces its existence back to 835 AD and is known for its events, Friday Liturgy and educational institutions. Praying here is considered to be one of the best things to do in Alleppey.

Currently, the church is a world renowned centre of pilgrimage, where one can know more about the culture and lifestyle of the Christians. This is one of the biggest churches and parishes of the Archeparchy of Changanassery. Currently, the church is known for housing 2500 families and is one of those Alleppey tourist places that are popularly visited by the masses.Sebastian over here is quite ancient and attractive. The statue is exposed for public veneration only during the feast festival. Fireworks and other dazzling display of colours make this feast even more remarkable, interesting and fun. The gorgeous decorations, feast and regal look of the church make it one of the best things to do in Alleppey.

About 45 kilometres to the south from Kochi and 22 kilometres to the north from Alappuzha, in Kerala a southern state of India, situates the simple and beautiful village Arthunkal. This is under Cherthala Taluk and Alapuzha District. The nearest Railway station is Cherthala.The main ‘nercha’ (offering) in this church is ‘Ambum Villum’ (Models of Bow and Arrow in gold, silver or rolled gold). Rolling oneself the whole distance from the beach to the church, which is more than a kilometre, carrying the nercha material in hands is an example of deep faith and dedication. To tread around the church in clockwise direction(‘Valathu’) sometimes carrying a stone or brick on head for three times or more, to clean the church or its surroundings, to dedicate onelsef before the saint with priest’s blessing and prayer(‘Samarpanam’) are a few of other offerings.