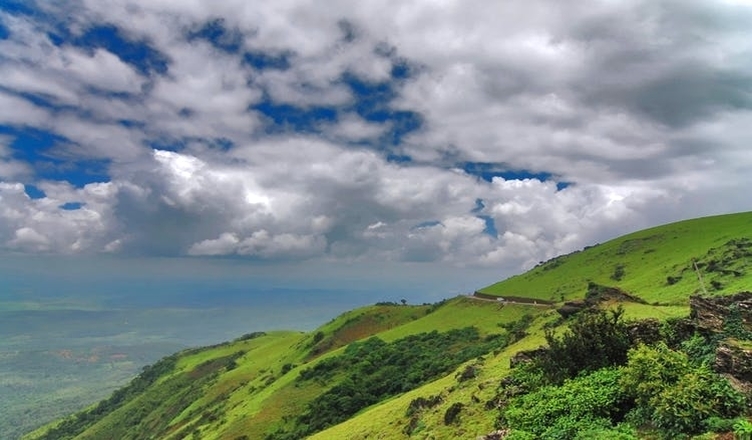 Chikmagalur city belongs to the Malnad region of Karnataka.The Western Ghats start from this area.The Yagachi River is originated from the surrounding hills.Chikmagalur is famous for its serene environment, lush green forests and tall mountains.Chikkamagaluru is also famous for coffee and is known as the coffee land of Karnataka.It is the place where coffee was cultivated for the first time in India.Chikmagalur (also known as Chikkamagaluru) is a hill town located in the Chikmagalur district of Karnataka.Situated at an altitude of 3,400 feet at the foothills of Mulliyangiri range.Chikmagalur is one of the best hill stations near Bangalore and also among the most famous tourist places near Bangalore.It is a great attraction for trekkers and those wishing to experience the peaceful ambience of the city.The other attractions that the town has to offer include Mullain Giri, the highest peak in Karnataka,Jamia Mosque,Kondadarama Temple,St Joseph’s Cathedrals well as the Siddheshwara temple,which is just nearby.

Kudremukh National Park is a different experience from all places to visit in Chikmagalur.This place is located about 96 km from Chikmagalur city.Located in the pristine environs of the Western Ghats, the park is located at an altitude of around 1800 metres above sea level.This high altitude presents multiple benefits.One of them is the climatic condition of this place.The national park has serene and mild weather even during the harshest summers in the state.

The highest peak in Karnataka is at Chikmagalur,called the Mullayanagiri.The height of this peak is close to 2000 metres.This peak is supposed to resemble a trekker’s backyard.Mullayanagiri has amazing trekking trails.Nature walks here are among the best in the country.Located 12 km from Chikmagalur,Mullayanagiri is the highest mountain between the Himalayas and the Nilgiris.On top of the peak,there is a small temple.Dedicated to Lord Shiva,hundreds of Shiva devotees trek all the way up to offer their prayers.

Hebbe Falls are yet another picturesque destination in Chikmagalur.The falls are accessed from Kemmangundi hill station.The falls are surrounded by astonishing greenery.Dense forests, thick foliage,rich flora and hills encompass this region.Coffee plantations are sprawled across the expanses around the falls.Descending from a height of 168 metres,the falls are divided into two stages – the Big Falls and the Small Falls.

Chandra Drona Parvatha, Datta Peeta has several high mountain rises.Located in the Baba Budan Giri range,this is a popular tourist destination.The mountain is named after the Muslim saint Baba Budan.The Baba Budangiri range is very prominent in Chikmagalur.It is a picturesque destination with rich sightseeing attractions. Mullayanagiri is the highest peak in this region.This place rises to a peak of about 1900 metres.

Getting there
Kadur 40 Kms,Birur Junction 47 Kms