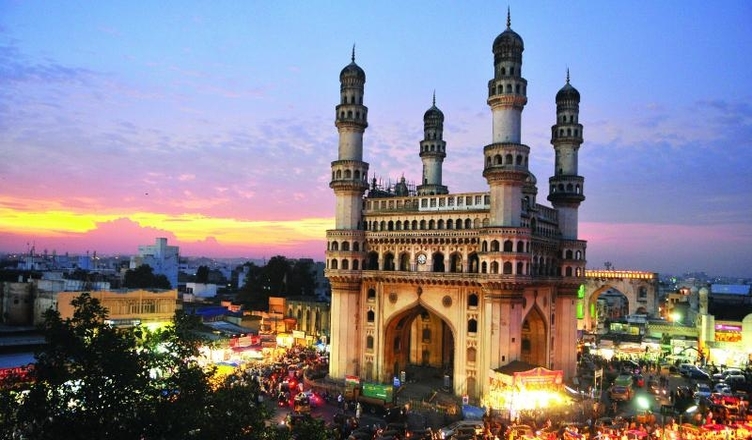 The capital city of Telangana,Hyderabad is a popular tourist destination and presents its visitors with a mesmerising contrast of age old traditions,culture at one end and modern facilities,amenities of a metropolitan city at the other end.Hyderabad is one city,which has no dearth of tourist attractions.The very well known Charminar of Hyderabad is located at the Old City.This square shaped structure with a height of 56 m and breadth of 30 m was constructed in 1591.It was built by Sultan Mohammed Quli Qutb Shah in the honor of his wife Bhagmati.Also referred as the ‘Arc de Triomphe of the East’, Charminar is adorned with four towers in each corner. The minarets on each side, is of 48.7 m height, each with four storeys. Chaminar has a small mosque as well on the top floor. There are 45 prayer spaces which are still visited by people,articularly on Fridays.Lighting in the evening is quite glamorous and makes for a worth watching site.It has been built of granite and lime mortar.Each side opens into a plaza through giant arches,overlooking four major thoroughfares.Each arch has a width of 11 metres and height of 20 metres.The minarets cover a length of 48.7 metres from the ground to the apex.Each minaret of the building has four storeys.One can see the motif of Qutub Shahi buildings in the way each minaret has been constructed over base which looks like lotus leaf.

Mecca Masjid,also called Makkah Masjid, is one of the popular tourist spots of Hyderabad attracting not just devotees but almost everyone.The construction of Mecca Masjid Hyderabad involved close to 8000 masons who worked round the clock.This construction went on for almost 77 years.Located in the Old City,at a distance of 100 metres from the Charminar which is another popular place for sightseeing in Hyderabad,Mecca Masjid is one of the largest mosques not just in India but also in the world.

Laad Bazaar is located quite close to the Charminar which is undoubtedly one of the most popular tourist spots of Hyderabad.Adjacent to the monument,the Laad Bazaar is stretched on four roads starting from Charminar and is spread across an area of one kilometre.The Laad Bazaar still presents a glimpse of the bygone eras.Lacquer is one of the important materials used to make bangles;these vibrant lac bangles are very popular among visitors.The market,not just offers wide range of colour bangles to customers but also zari and embroidery works,sarees to other traditional clothing stuff along semi-precious stones.

Chowmahalla Palace is one of the popular sightseeing places in Hyderabad.The literal meaning of this place is “Four Palaces” with “Chow” means four in Urdu and “Mahalat” which is the plural of “Mahalel” meaning palaces.The Palace originally covered 45 acres which extended from the Laad Bazaar on the north to the Aspan Chowk Road on the south.Now,the total remained area of the palace is close to 12 acres.