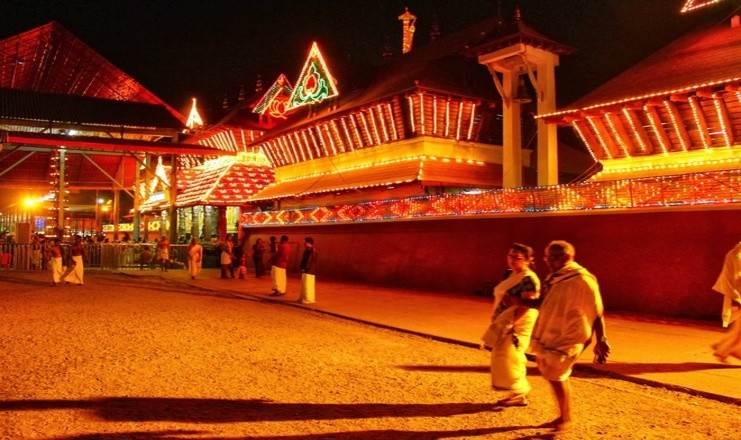 It was my second visit to Guruvayur, one of the famous spiritual destinations of Kerala. First I went before my marriage with my bundle of personal demands to plead in front of Vasudeva, lord who had rescued his devotees from Demons and miseries.

I was excited with the ambiance of the temple and its surroundings. That was first experience in my life. This great temple is well-known for its epic stories related to its origin and its devotees.

We started our journey from Thekkady on early morning in my car. The distance from Thekkady to Guruvayur is 210 km and 5.30 hrs journey.

Thrissur is well-known as cultural capital of Kerala. It is famous for its temples; Vadakkumnathan Temple, Thiruvambadi Sri Krishna Temple, Paramekkavu Temple and Guruvayur Temple. Thrissur Pooram is world renowned one because of its peculiarities. It was also considered as the spiritual and cultural destination of Kerala.

My mind was filled with joy and excitement that I enjoyed from my first visit. My grandfather, who died before ten years, was the motivation behind my spirituality. But he was a complete devotee of Lord Shiva. He used to wake up in early morning and do chants of Lord Shiva. He was truly innocent and never uttered a hard word against anyone. He taught me to chant the mantras of Lord Shiva, Dakshinamurthy, Guru of this universe. I have been practicing this from the age of fourteen but after I went to Bangalore it has stopped.

We entered to Thrissur town at 6 o’clock morning. My grandmother reminded me, “We are near to Vadakkumnathan Temple”. I have asked a pedestrian, who showed me the way to Vadakkumnatha Temple. The temple is encircled by Thekkinkadu Maidan where Thrissur Pooram is being conducted every year.

We entered into the temple after parking the car. The security person warned me against entering with my six months old baby. According to beliefs children below one year of age are not permitted to enter in temples like Lord Shiva and Bhadra kali.

It is a big Temple by its surroundings and sub-shrines are located each corner of the temple. We entered in front of the sanctum sanctorum (Sree Kovil). It was my first time visit to this famous Shiva Temple in Kerala. The ambiance of the temple and its surroundings are quite astonishing one for any devotee. When we finished our prayers we came out of the central entrance. We saw a person around the age 40 stood in front of the main entrance and chanting the mantras written on the board placed near there. I felt as the voice that coming from the bottom of his heart and each and every ending of those lines he was raising his hands and praising Lord Shiva. The transcendental spiritual vibrations embraced me for some time. I felt my grandfather was with me that moment.

Time went on so fast , as we have to reach Guruvayur, our prime destination of us but we forget it for some time. I have drove fast to get rid of the traffic. We reached by 9 o’clock at Guruvayur.

The much awaited visit, but I was exhausted with confession. The crowd was almost double compared to my previous visit. After Nivedyam we entered to central shrine Lord Krishna in Balakrishna form. I felt myself awful that I could not keep my word. I have started my journey to see Guruvayurappan but instantly changed everything. After prayers we went to Mammiyoor, temple of Lord Shiva. We were stayed one day at Guruvayur and after seeing Nirmalyam we returned to home.

I drove my car with a distorted mind but after sometime I remembered my grandfather’s words “Lord Shiva and Vishnu are different forms of Supreme God ahead”.

Next time I have planned go Guruvayur first, but I do not know what will happen when I see Vadakkumnathan Temple in the midst of the city of Thrissur.