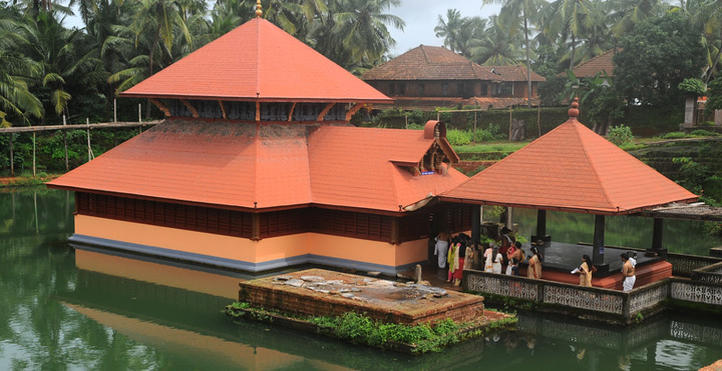 Ananthapura Lake Temple in Kasaragod, built in 9th century, is the only lake temple in Kerala and is the moolasthanam (original abode) of Ananthapadmanabha, the deity of Sree Padmanabhaswamy Temple in Thiruvananthapuram. The sanctum sanctorum of temple is reachable only by a bridge. A crocodile at the temple pond, said to be 150 years old, is a major attraction.

The shrine is encircled by a ‘Chuttambalam’ (an enclosed verandah running around the building), its walls are adorned by murals and there is a cave within that opens out to a small pond where the water level remains steady regardless of climatic changes. Thapotsavam is the annual one-day festival celebrated on the fifth day after ‘Vishu’ in the Malayalam month of Medam (April) here. The idol of the main deity is carried in a ceremonial procession along the lake surrounding the shrine on two canoes tied together. Popular performing art form, ‘Yakshaganam’ of the neighbouring state of Karnataka is performed here on the night of the festival.

Kasaragod Railway station, on the Kozhikode-Madhur road, about 14 km.